I was tasked with creating an image for the band 5 or 7's Christmas message.  The message was online only for sharing on Social Media.

I was given a selection of photos, but chose one that had strong lines and was a good photo of the guys.  The logo was a white on black image - so I isolated the black and deleted it, and then changed the white outline using a 'stroke' effect so that it fit more in line with the colour themes of the image. 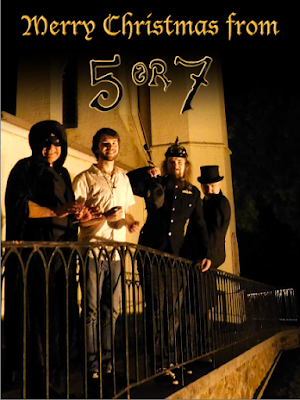 Interestingly my bevelling and embossing and other layer effects didn't save out when I tried saving as a JPEG or PNG.  I'm not sure why that was - it needs a bit of further investigation.

With a short time frame and knowing that it's going to be a short-lived online-only image I just went the easy route and screenshot my photoshop image!!

Now I'm looking at it I'm wondering if I should've sepia'ed the image and moved the guys down further so you saw more of the church.

I guess there's always more tweaks I could do - so hard to say 'enough' and move on!!
Posted by orchid at 20:21 No comments: