This is my 2/2 blog posts about Photomedia artists.  In this one I've chosen to look at Alexia Sinclair who produces vivid, gorgeous pieces with a fantasy feel.

In her collection ‘The Regal Twelve’ she combines photographic elements and illustrations to portray 12 female European monarchs.

Sinclair starts with a photo of a posed monarch.  The image below shows Elizabeth the 1st in a heavily stylised version of her famous collared gown.  The accoutrements of power are clasped in her hands.  Her hair is an extraordinary feature that works as a crown.  Framing her hair in the background there’s a halo which gives her a holy look.  She’s sat on a chess board as a pawn, other pieces surrounding her.

The awesome things about Sinclair is her willingness to share her process - and it's amazing how much work she puts into a single photograph.  This is evidenced by her video showing the process for Into the Gloaming:
https://www.youtube.com/watch?v=pxVZpyJir7w

More of Sinclair's work is viewable on her website:

As part of my design course I was tasked at looking at two Photomedia artists and deconstructing how they produced their images.  For my first artist, I'm looking at Michael Cook.
Cook is a Brisbane based artist.  One of his series is called Invasion and is about alien creatures invading London.  The images are a flip of Australian Colonial History - in these images the aggressors are iconic Australian creatures, and the victims in these images are white Londoners.  As Australia was invaded, Australia is invading back!

Cook starts with a base picture of an iconic London streetscape.  The ‘invaders’ are cut into the scene.  The image below looks like bald cockatoos (a nod to Australian wildlife) menacing people running screaming to avoid them.  There are people emerging from the tube station exit encountering the fierce birds.  The image is washed out - almost like it was an old photo - taken at a time where the colouring of photos wasn’t at the level it is today.  The people in the scene are dressed in outfits from the 40s, 50s and 60s.  Perhaps a nod to the period of white immigration into Australia.

The other images from the series feature different Australian animals, menacing the people of London, and all feature people in older-style clothing in a similarly washed out looking photo.

They were exhibited at the ‘This Is No Fantasy’ gallery:
https://thisisnofantasy.com/artist/michael-cook/ 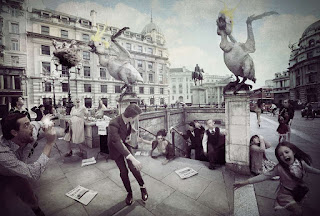 Photomedia with a surreal twist

I've been exploring Photomedia recently and have come across some stunning examples of image manipulation and composition.

Someone that really stands out is Erik Johansson - he creates surreal images that play with your perceptions and launch you into a fantasy world.

Uli Staiger talks about his workflow in a promotional video for Adobe Photoshop, showing the way he pulls together images to create something new and interesting.

As part of my design course I'll be delving into creating my own Photomedia in the very near future.  The artists above provide good inspiration and indeed aspirations.
Posted by orchid at 17:48 No comments: